When I was over halfway through writing the poems for my first book, I had the opportunity to participate in a reading, and I chose a selection of what I considered at the time to be my best—or at least favorite—work. A mentor of mine was in the crowd, and afterwards when everyone was hanging out and complimenting the readers, as happens at those things, he had some nice words to say to me, and then mischievously added, “a very avian reading.” Um, so it turns out I wrote a lot about birds.

Obsession can be a form of concentration, a way to find possibilities for what you already have at hand. The leftover rhubarb from the Valentine’s Day salad and some strawberries I had bought for the occasion but never used provoked me to make a dessert. I’m not ready for pie, but a free-form, rustic, and forgiving tart that is the crostata was a great place to begin. Googling landed me on this super easy and tasty eggless crostata recipe from the blog EGGS ON SUNDAY.

I’m sure on some level I was aware of it, but I wasn’t painfully aware of it until that moment. I didn’t—and don’t—regret the flocks, the bevies, the congresses and murders and murmurations of birds populating those poems. I needed them at the time. Which is another way of saying they were an obsession. They had become for me a way of talking about some of the themes of that book. Birds were a vocabulary I adopted (and, yes, perhaps a rather conventional or at least traditional one) to express the transactions between an interior life and the external world, for the challenge of trying to capture a present tense that is always winging into the next present moment, for the anxiety over this here mortal coil, and the nostalgia for something transcendent. And in my aesthetics at the time—a kind of meditative poem that makes excursions into a representational report of the world around its lyric speakers—those birds made perfect sense. Yet, once I was aware of that reliance, I had to make the decision to keep trying to perfect and rejuvenate that vocabulary or to move on if I felt it was merely habit at that point. I moved on.

To put things into perspective, here’s a little obsessive inventory. In The Currency, the word “bird” or bird-related terms, including species names and words like “feather” and “wing,” appear twenty-eight times. In my new manuscript, which is nearing its final stages before publication, such words only appear fifteen times, and eight of those occur in a single poem, the most recent one I’ve written for the book. The words “bird” and “birds” were used thirteen times in writing The Currency, but in the five years since I finished it, I’ve called on those words only four times for Pax Americana. Part of this shift was a conscious reaction against complacency, but it’s more complicated than that. With new obsessions, I needed to find new symbols in order to communicate.

Repetition is the mother of obsession. This is another take on a watercress salad, but unlike the Valentine’s Day version, this one has peeled baby heirloom tomatoes, with edamame, avocado, toasted and salted pumpkin seeds, and a pumpkin oil and sherry vinaigrette. It is served over fried firm tofu. The technique for peeling the tomatoes comes from the Momofuku cookbook. It’s really easy. Cut an X in the tomato skins on the non-stem ends. Prepare a pot of boiling water and an ice bath. Drop the tomatoes in batches into the boiling water for ten seconds and then transfer them to the ice bath. The peels will slip right off. David Chang has a recipe for serving these tomatoes with fresh tofu that partly inspired this dish.

Here’s some additional counting: in The Currency, there are eighteen references to visual art. In Pax Americana, there are four. The Currency alludes to three films (and I mean “films” with all its pretentious baggage). Pax Americana alludes to or directly names seven “movies,” seven television shows (with multiple nods to Joss Whedon, Alias, and HBO series), news casts, and a YouTube video. Writing (in the form of poems, letters, philosophical and biographical texts, etc.) comes up sixteen times in The Currency, but there are forty-four references in Pax Americana (including a Wikipedia entry). It appears that I’m still using poetry as an interpretive act, but I seem more interested in how we organize our lives into language than I am in finding those meanings in the tableaux of paintings. I also find I’m reaching towards a larger range of experience.

Obsessions are often the working out of an idea, and they last until the vitality of that search settles into habit. An obsession in a poem can also be the way a poem is made. Every poem is an expression of what a poem can be. Eventually, you might just be writing a poem because, well, that is how you know a poem is made. If you’re honest with yourself as a poet, you’ll ask why you’re making a poem the way you are. When you stop being able to answer that question compellingly, it is probably time to look elsewhere for a new set of images, symbols, and structures, so a new vocabulary.

Peeling Cherub tomatoes for a ragout.

I’ve been thinking about cooking lately in these same terms. It’s as if the dishes I’m cooking and the ingredients and methods I’m using are a vocabulary for me to express what a dish can and should be.  The notion of “should be” is an ever-evolving one. What seems necessary today won’t necessarily be so tomorrow. Sometimes I land on a preparation or flavor that I enjoy so much or that has a potential that has eluded me, and so I obsessively use it. Experimenting. Tweaking. Until it becomes a routine. Just a tired iteration. There was a time when what signified a side dish was a pile of roasted carrots and parsnips. Then, there was the age of the Brussels sprouts. For a while, purées of English peas cropped up regularly. For the past three weeks, I can’t stop making ginger scallion noodles. Besides, it would be a shame to let these leftover ingredients in the fridge go to waste.

Obsessions in cooking, along with their leftovers, can attract new discoveries, like a planet accruing satellites. The vegetables remaining from Valentine’s dinner sent me off to Nippan Daido Japanese Market in west Houston. They also encouraged me to try my hand at making a dessert. Thanks to the Eggs on Sunday blog, that dessert attempt was a success, and I now have something in my repertoire to complete an entire meal, from first course to last.

My trip to Nippan Daido to explore further the Japanese ingredients I’ve been using resulted in this dish. After making the fried tofu for the watercress salad, which was my first time frying tofu, I tried it again. I contrived a version of the citrus-soy-ginger glaze I used on the pork belly, but added sesame oil and seeds and used fresh ginger. The broth here is bacon dashi with dried shiitakes and the red miso I’ve been steadily depleting.

At Nippan Daido, I purchased some enoki and beech mushrooms that I planned to use in a batch of ginger scallion noodles. I also got some sake, which I decided to use in a braising liquid for some beef short ribs. The marinade for the short ribs I got from the JUST ONE COOKBOOK blog, which seemed appealing because it calls for gochujang, and I just happened to have some of that tasty, spicy Korean chili paste in the fridge. I marinated the ribs for over a day, then browned them off in a dutch oven with some pork belly fat. (I’m going to be so sad when this liquid gold is gone.) I made a braising liquid of sake, chicken stock, soy sauce, and sliced yellow onion. I cooked the ribs at 315 °F for two and a half hours, basting with the braising liquid every half hour. When the ribs were done, I removed the bone, tough membrane, and most of the excess fat, and then glazed them with a mixture of gochujang, brown sugar, and kosher salt in a 475 °F oven.

Because I just can’t leave things alone, I transformed the leftover short ribs into this dish the next night. I already had everything I needed except a few vegetables, and these ready-to-use, fresh purple hull peas caught my eye at the grocery store. I immediately thought of a ragout, so I picked up some mustard greens and the above pictured Cherub tomatoes. The ragout is composed of one bunch of sliced scallions sautéed in some of that pork belly fat, the purple hull peas, the peeled Cherub tomatoes, a cup of chicken stock, two tbsp tomato paste, and some leftover pan juices that I had separated from the fat after cooking the short ribs. Once the peas began to soften up, I added the chopped mustard greens with their thick ribs removed. I seasoned with kosher salt and fresh cracked pepper. While the ragout was cooking, and before I reheated the short ribs in the oven, I decided to do the ribs two ways. I envisioned a kind of deconstructed ragout with shredded short rib on the side and then a whole rib next to that. I needed something to accompany the whole rib, and I was lucky enough to have a large white potato in the fridge and a can of chickpeas in the pantry. I took up the challenge to be resourceful. I cooked the potatoes in water, a tbsp of butter, a hunk of fresh ginger cut into three pieces, and a sliced garlic clove. When the potatoes were nearly done, I added the drained chickpeas. I strained once finished, removed two of the three ginger bits, and then blended the mixture with a little milk and butter. The result was a little too much of a gluttonous paste, so I added a dollop of sour cream and a spoon of chèvre to give it something it was lacking. The plate was a little bland looking, and I brightened it up with a julienne of pickled beets and some kimchi I bought at Nippan Daido. 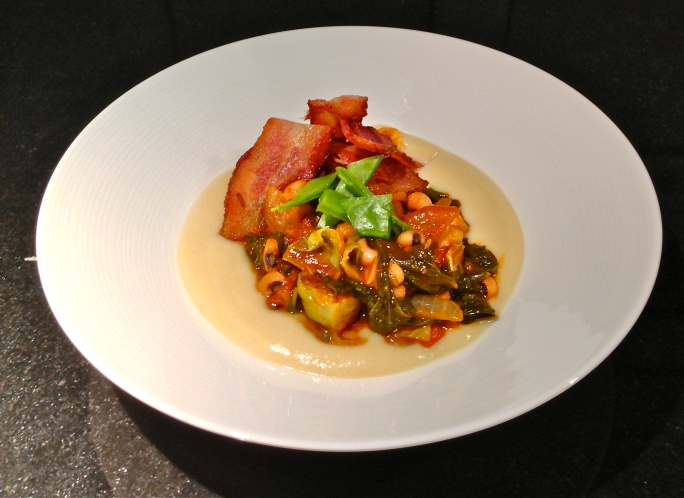 So I had all of this leftover ragout and potato-chickpea purée, but no more short ribs, and the Oscars were on, and we had to eat something, so I cooked off some bacon, sautéed some chopped yellow onion in the bacon fat along with halved Brussels sprouts, and then added the leftover ragout. I served this concoction over the reheated potato-chickpea purée, which was surprisingly better the next day, along with the bacon and some chopped snow peas.